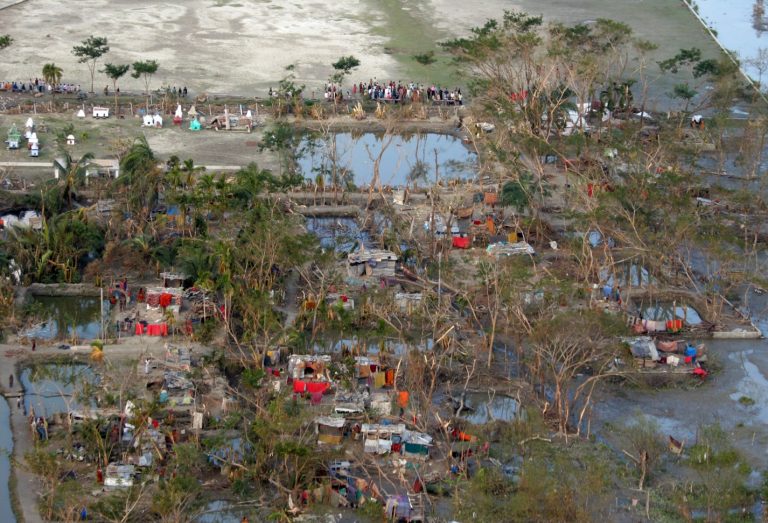 Climate change poses a very real threat to the enjoyment of human rights: sea level rise, heat waves, floods, drought, and other effects can cause death and injury, displace people from their homes, undermine food and water security, and otherwise interfere with the lives, health, and well-being of millions of people. The Sabin Center's research explores how international human rights law can be used to enhance mitigation ambition and protect people from these effects.

The Sabin Center has conducted extensive research on the legal implications of climate change for small island nations and has hosted events to discuss these topics with key stakeholders. We have also assisted delegations from these countries during international climate negotiations, in part through our work with the Legal Response Initiative.

On March 1, 2015, a group of experts in international law, human rights law, environmental law, and other law adopted the Oslo Principles on Global Obligations to Reduce Climate Change. Michael Gerrard, faculty director, was among the experts who contributed to this project. View the commentary on the principles here.

Human Rights and the UNFCCC

The Sabin Center engages with the UNFCCC secretariat and parties to ensure that human rights are adequately accounted for in international agreements and implementing actions.

In December 2016, Michael Burger and Jessica Wentz submitted an amicus brief to the Philippines Commission on Human Rights in support of a petition requesting an investigation into the responsibility of the “Carbon Majors” for human rights violations resulting from the impacts of climate change. The submission outlines the various ways in which climate change interferes with the enjoyment of human rights in the Philippines and around the world, and explains why the private companies can and should be held accountable for human rights violations arising from their contribution to climate change.

Michael Burger and Jessica Wentz also contributed to a Joint Summary Brief which consolidates and summarizes key messages contained in amicus briefs in support of the petitioners in this investigation.

The United States underwent its second Universal Periodic Review (UPR) before the United Nations Human Rights Council in 2015. The Sabin Center worked with other stakeholders to encourage consideration of climate change and its human rights implications during the 2nd UPR. Writen submissions included:

Protecting the Human Rights of Persons Displaced by Climate Change, submitted to the U.S. Department of State in advance of the 2nd UPR (May 2015)

Human Rights and Article 6 of the Paris Agreement: Ensuring Adequate Protection of Human Rights in the SDM and ITMO Frameworks, Romany Webb and Jessica Wentz (May 2018)

Article 6 of the Paris Agreement authorizes the use of market-based mechanisms known as “internationally transferred mitigation outcomes” (ITMOs) to reduce greenhouse gas emissions, and establishes the Sustainable Development Mechanism (SDM) as a framework for coordinating international mitigation efforts . This paper discusses different approaches to ensuring human rights are protected under Article 6. We consider, as one possible approach, whether and how social and environmental safeguards could be incorporated into the rules governing ITMOs and the SDM. We find that there is a compelling policy rationale for incorporating safeguards into both the ITMO and SDM frameworks, not only to prevent human rights abuses, but also to ensure the success of ITMO and SDM programs and projects.

This article explains why the international pledges submitted for the Paris Agreement are not enough to avoid serious impacts on people and communities – specifically, impacts leading to the displacement of millions of people from their home.

This is a transcript of a presentation delivered at the Judges’ Summit on Human Trafficking and Organized Crime Pontifical Academy of Social Sciences. It discusses how climate change will affect displacement and human trafficking and the extent to which the Paris Agreement will address these key problems.

This report, commissioned by the United Nations Environment Programme (UNEP), describes the nexus between climate change, environmental degradation, and the impairment of fundamental human rights, such as the rights to food, water, housing, and life. It explains how governments and other actors can address climate change in a manner consistent with their obligations to respect, protect, promote and fulfill human rights. The report was released during COP21 to help inform the development of the Paris Agreement.

All publications on human rights are available here.

This document contains a review of publications that deal with the nexus between climate change and human rights.